The AHI Performing Provider System (AHI PPS) launched in 2014 as part of the Delivery System Reform Incentive Payment (DSRIP) Program. The PPS, led by Adirondack Health Institute, was charged with bringing together community-level collaborators from all sectors to collectively reform the health care system for the benefit of Medicaid beneficiaries.

The AHI PPS is a partnership formed to plan for and manage DSRIP health care restructuring. 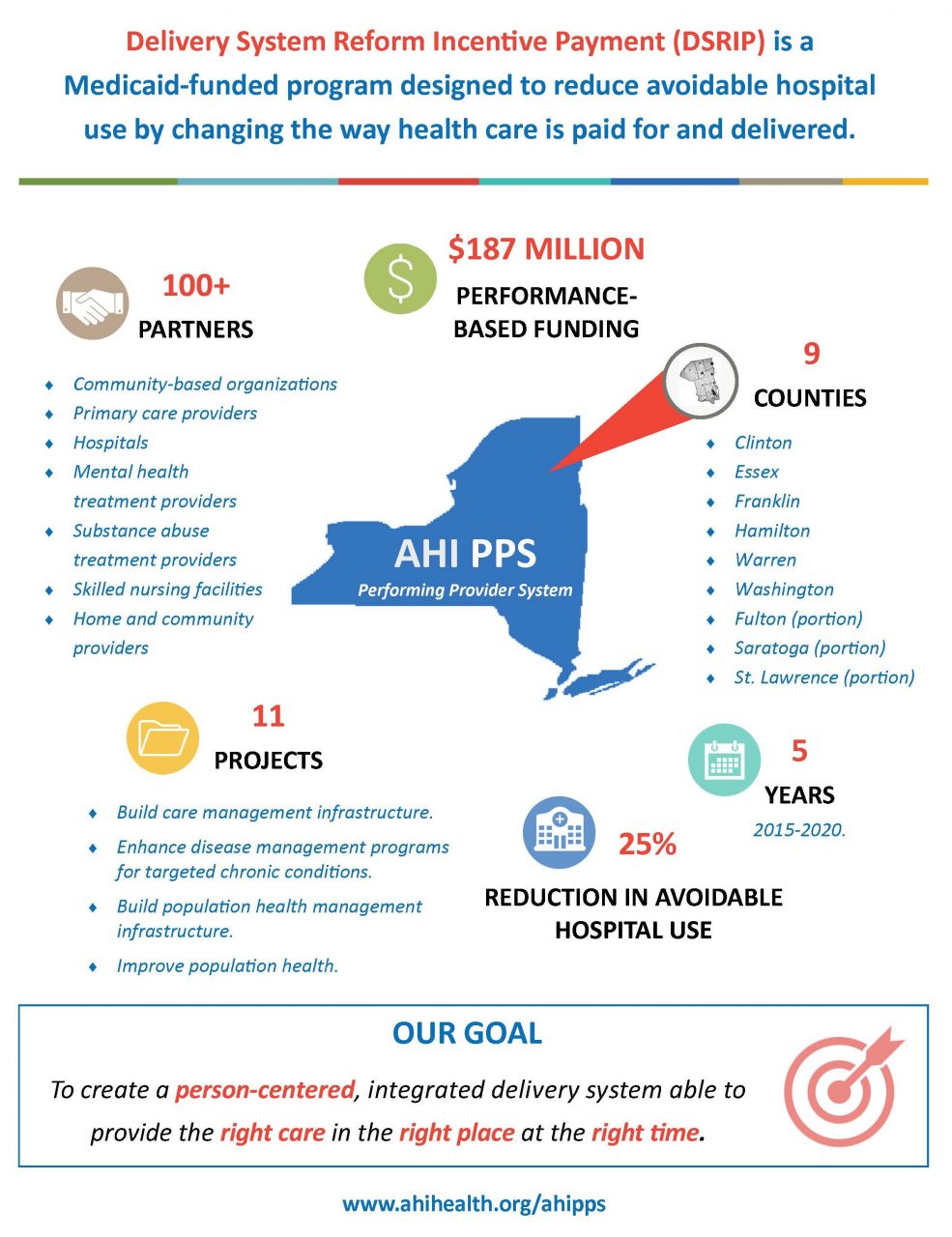 AHI PPS partners have worked diligently for nearly five years to achieve DSRIP goals and improve health and wellness in our region. Some initiatives implemented to further the AHI PPS’ objectives and meet partner and community member needs included:

The AHI PPS has made significant progress toward its goals over the course of the DSRIP program. Examples of emerging promising practices and partner success stories include:

The New York State Department of Health valued our 11 projects at nearly $178 million, to be distributed over a five-year period. The award was not a grant, but rather a performance-based award. The total value assumed all process metrics would be achieved and all performance goals would be met.

DOH has flowed funds to Adirondack Health Institute who has had the responsibility of managing the award for partners, ensuring DSRIP dollars benefit Medicaid beneficiaries and support the success of the delivery system under health care reform. Determination on the distribution of funds has been endorsed by the PPS Steering Committee, and the AHI Board of Directors.

The above represents only a small sampling of robust and expansive work efforts. As the DSRIP program nears its end in March of 2020, the AHI PPS continues to assess and evaluate the impact of its partners’ collective efforts since 2015. Additional examples of promising practices, outcomes, and success stories will be forthcoming.

AHInformer is a news digest containing information about Adirondack Health Institute and partner programs and initiatives, including those related to the DSRIP Program. The newsletter, distributed bi-weekly to nearly 1,100 stakeholders, has spotlighted countless AHI PPS success stories.

You have Successfully Subscribed!